Five-time champions Mumbai Indians registered their second win of IPL 2022 last night against the Gujarat Titans. The Mumbai-based franchise started their season with eight back-to-back losses, but they have returned to form with wins over Rajasthan Royals and Gujarat Titans. Last night, Daniel Sams defended 9 runs off the last over and helped MI win. Ishan Kishan also played an important role in the team’s win.

Gujarat Titans captain Hardik Pandya won the toss against his former team and elected to field first. Ishan Kishan and Rohit Sharma provided a great start to the Mumbai Indians, but both returned to the dressing room before they could complete 50. Kishan top-scored for the team with a 29-ball 45, smashing five fours and a six.

His innings helped MI finish with a 177-run total on the board. Gujarat Titans got off to a great start but fell five runs short eventually. 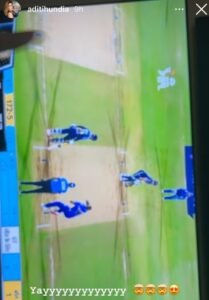 In the second innings, wicket-keeper Ishan Kishan executed two crucial run-outs. He dismissed Hardik Pandya with a direct hit, while he took the bails off in time to send Rahul Tewatia back to the dressing room in the final over.

“When he (Saha) got out, suddenly there were two new batters on the ground. Sai Sudharsan got out in a different fashion, generally you don’t get out like that but it happened. Hardik Pandya got run out, run-out is a very very big problem. Ishan Kishan’s direct hit was actually critical.”

Gujarat Titans will be keen to forget that defeat and get back to winning ways soon in the 2022 IPL season.
Tags
Daniel Sams GT IPL 2022 Ishan Kishan mi